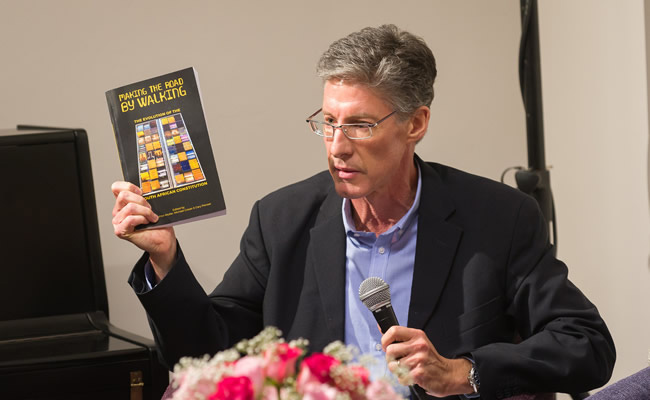 The Pretoria University Law Press (PULP) recently launched a collection of essays dealing with the lives and judgments of some of the first Constitutional Court Judges who were also all appointed by then President Nelson Mandela.The book, Making the road by walking, was launched at the Centre for Human Rights, Faculty of Law, University of Pretoria (UP), on 18 April 2018, as South Africa and the rest of the world honour the birth-year of the iconic Nelson Mandela 100 years ago. A panel discussion took place under the banner: “Mandela’s legacy (re)considered: Historical and current perspectives of the Chaskalson Court”.

Making the road by walking considers the contribution of eight of the Judges who served on the Constitutional Court headed by Chief Justice Arthur Chaskalson, and who were still alive and no longer served on the Court in 2013. They are Justices Ackermann, Goldstone, Kriegler, Mokgoro, O’Regan, Sachs, Skweyiya and Yacoob. They were all appointed by President Nelson Mandela. This book is edited by three members of the Human Sciences Research Council’s Democracy, Governance and Service Delivery Programme (Narnia Bohler-Muller, Michael Cosser and Gary Pienaar).

On this occasion, the editors and some of the authors of chapters on the various Justices reflected on the character and thinking of these Judges, as concretised in their judgments. In addition, Justice Van der Westhuizen, who served on the Court between and 2004 and 2016, and Professor Ann Skelton, the Director of the Centre of Child Law, at UP, who often appeared before the Court, placed the Chaskalson Court’s contribution in current perspective, and discussed it in the light of ongoing challenges to the constitutional project. In her remarks, Professor Ann Skelton emphasised that it may be very useful for litigants to have knowledge of a Judge’s personal background and predilections.

Justice Goldstone was present, and made remarks from the floor. Provocative questions from among the attendees were followed by responses from members of the panel. A number of themes that were explored include the following: In response to the question about the desirability and possibility of Judges being “neutral”, Justice Van der Westhuizen declared that judicial neutrality is impossible, especially if adjudication is based on the definitive values of the Constitution, but added that fairness is what Judges should aspire to. Asked about the “complicity” of the Constitutional Court Judges in inequality and poverty, Narnia Bohler-Muller, the head of the Human Sciences Research Council’s Democracy, Governance and Service Delivery Programme, pointed out that the Court has on numerous occasions found in favour of the rights of the down-trodden, but that the executive has on various occasions not given effect to these judgments.