By all means necessary: Protecting civilians and preventing mass atrocities in Africa 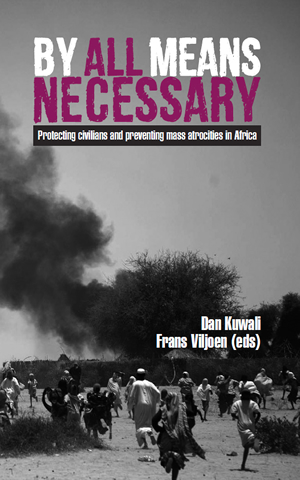 By all means necessary: Protecting civilians and preventing mass atrocities in Africa
Edited by Dan Kuwali and Frans Viljoen
2017

Recent times have witnessed civilians increasingly becoming the main casualties of violence, often deliberately targeted rather than merely caught up in the midst of the fighting in armed conflicts, leading to an unacceptably high toll on human life and livelihoods of civilians around the globe, and particularly in Africa.

The Centre for Human Rights, Faculty of Law, University of Pretoria, with the assistance of the United States Africa Command through the Africa Military Law Forum, on 18 and 19 September 2014 hosted a ‘Colloquium on the Protection of Civilians in Armed Conflict’, in Pretoria, bringing together over 80 academics, judges, practitioners, policy makers, military personnel, government officials and other commentators. The aim of the Colloquium was to consider the legal, procedural and practical challenges in the implementation of measures to protect civilians in armed conflicts and prevent mass atrocities.

Participants examined the notions of the ‘responsibility to protect’ (and its relationship to article 4(h) of the Constitutive Act of the African Union) and the ‘protection of civilians’. They further examined the scope and effectiveness of states’ obligations under international human rights law, international humanitarian law, and the law relating to the protection of women, girls, children, internally displaced persons, refugees and other vulnerable populations in armed conflict.

This publication, By all means necessary: Protecting civilians and preventing mass atrocities in Africa, consists of the papers presented at the Colloquium, which were subsequently peer-reviewed and reworked, and updated. The Colloquium and this publication were sponsored by the Norwegian Government, through its Embassy in Pretoria.

Article 4(h), the responsibility to protect and the protection of civilians
Dan Kuwali

PART II: PROTECTION OF SPECIFIC POPULATIONS AND PROPERTY AT RISK

PART III: MEANS AND STRATEGIES FOR DEALING WITH MASS ATROCITIES

The role of courts in protection of civilians
John-Mark Iyi

No peace, no war: Protection of civilians in the Great Lakes Region of Africa
Bright Nkrumah and Godard Busingye

Protection of civilians in the Horn of Africa
Paul Phiri

Protection of civilians: Experiences from the Middle East and North Africa
Joe Stork

The African Union’s agenda on the protection of civilians: A review of its ambition and practice
Solomon Dersso

PART V: THE FUTURE OF PROTECTING CIVILIANS AND PREVENTING MASS ATROCITIES IN AFRICA

The future of protection of civilians in Africa
Dan Kuwali