Race, Ideology and the University - PULP FICTIONS No.8 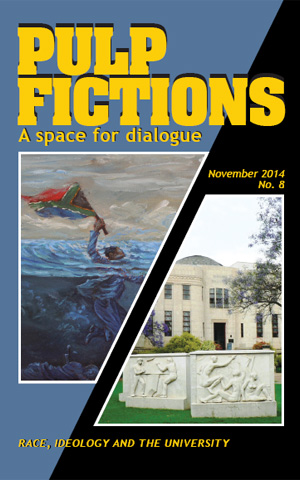 Keeping with its robust dialogic spirit, this edition of Pulp Fictions plays host to a diverse range of voices and perspectives. Responding to the events surrounding the publication of a controversial article by Louise Mabille, four authors from diverse (subject) positions in and outside of the University – Alfred Moraka, Gillian Schutte, Quaraysha Ishmail-Sooliman and Jaco Oelofse – focus on the issue of race and racial ideology in the University space. While Moraka engages with selected theories on the meaning and conceptualisation of racism and its relation to power, history and subject formation, Oelofse attends to the racially structured nature of knowledge and its perpetuation of white cultural domination. Schutte offers a searing reflection on whiteness in the “new” South Africa and Sooliman amplifies the problem of Islamaphobia and seeks to draw out its association to, and as, racism.

This edition of the Pulp Fictions, after a long hiatus, is a timely one in that it coincides with and critically challenges the central theme of what is called 20 years of “freedom” in “post-apartheid” South Africa. In recounting the continuation of racism, the incompleteness of transformation, the still dominant nature of whiteness and the emergence of new modes of racial power, the authors problematize the easy conceit that the nation is “free” of the vestiges of colonial racism and may now move on. That this also takes place a year after the passing of Nelson Mandela, in the shadow of events such as the Marikana massacre and in the context of the emergence of movements such as the Economic Freedom Fighters, further augments the relevance and political acuity of the papers here.

The contributions contained in this edition also contend – directly and indirectly - with the University’s own historical participation in and complicity with racism. Universities in South Africa and in all other settler colonies have always been instrumental in the development of an ideological and theoretical apparatus for oppression, through constructing for example scientific experiments and sociological knowledge that rationalises the enslavement, exploitation, colonisation of the indigenous Black population. In addition, South African universities appear to exhibit an ongoing epistemological and cultural unwillingness to be truly South African. For one thing, a predominantly Anglo-European intellectual tradition still frames much of the content being taught to students. African history, politics, philosophy, jurisprudence etc., are continuously relegated to electives or moved out of departments into ‘Institutes’ or ‘Centres’ of African Studies. This reflects, we think, that a certain Hegelian doubt about whether Africa has a history, and indeed an intellectual life, remains current in institutions of higher learning in this country. Indeed it remains a stark irony and injustice that the thought and history of and from Africa, rather than being the norm of intellectual and theoretical discourse, functions for many as an extra option or hobby to be pursued in leisurely time – to be found only in the ghettos and margins of universities. The papers collected in this edition then should also be read as raising serious questions about South African universities’ continued complicity in the relegation of the African in Africa to the ‘other’ also at the level of epistemology and knowledge production. Given the context, a particular and direct focus on the University of Pretoria is warranted.

It is clear from public discourse that these conversations about racism, economic power and liberation are taking place in South African society. This publication is but one attempt to intervene and participate in those conversations and adds to the growing voice calling for a socially responsive and historically grounded intellectual tradition in South Africa.