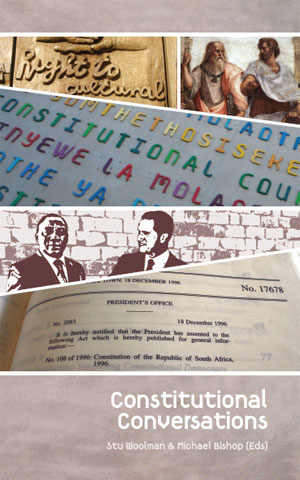 “Each of the topics [canvassed in this work] is engaged by two commentators in dialogue form: the views of one commentator are first advanced, to which a second commentator replies. The result is a satisfying conversation that edifies the reader both in areas of well thought-out agreement and in areas of disagreement. This book thus contributes greatly to the vital debate in legal circles and civil society at large about a select number of core problems arising from our Constitution. It does so in a manner that demonstrates how to argue productively about basic questions of law and human rights. And it is full of constructive proposals that will light the way along South Africa’s new path. For that, the editors of and contributors to Constitutional Conversations can only be commended.”

“In my view, if the debates involving judges and scholars that led to this book are anything to go by, dialogue between the judiciary and the academic world is likely to become increasingly fruitful in the years to come. US Supreme Court Justice Robert Jackson, whom I love to quote, sardonically remarked that the ‘Court does not have the last word because it is infallible. It is infallible because it has the last word.’ We judges have to acknowledge, however, that the last word on the infallibility of the judges themselves will lie with the academic critics. O dialogo continua! Long may the dialogue continue!”