National Commissions of Inquiry in Africa: Vehicles to pursue accountability for violations of the right to life? 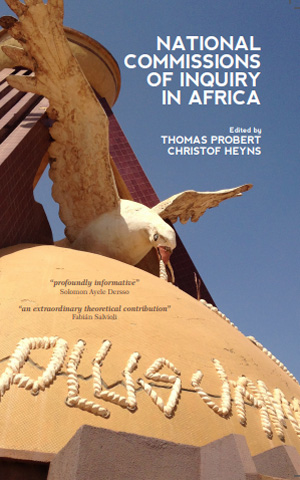 National Commissions of Inquiry in Africa: Vehicles to pursue accountability for violations of the right to life?
Edited by Thomas Probert and Christof Heyns
2020

National commissions of inquiry in the aftermath of violations of human rights, including violations of the right to life, are a common feature of the African legal and political landscape. There is often a fair measure of scepticism or caution about their use, and with good reason. They can serve as convenient instruments to avoid accountability, rather than to achieve it. However, very little hard evidence is available upon which the performance of such commissions can be assessed, and hence impressions of their utility are often largely anecdotal.

For the purposes of this book, researchers went to six countries in Africa—Chad, Burkina Faso, Kenya, Malawi, South Africa and Nigeria—and conducted in-depth investigations of commissions of inquiry that have been held there, interviewing those directly involved in the proceedings and those working on the issues since, including victims, lawyers, investigators and Commissioners. Drawing on this research, the book argues that commissions of inquiry should not be contrasted with courts or with criminal trials, since their proper place is at a different stage of the investigative process. Rather than replacing criminal processes, commissions might guide whether and how they should take place. Commissions can be cathartic events for victims or families; they can demonstrate that human rights are a priority for the state and thus lay the foundations for the rule of law; and they can make broader recommendations about what should be done. In short, in certain circumstances, they can serve to enable a broader concept of accountability.

Praise for this publication

“A rich collection of well-researched chapters made up of normative analysis and case studies, which presents a much-needed scholarly contribution to the question of accountability for violations of human rights—particularly the right to life—through a means other than a routine criminal process, a question with which the African Commission on Human and Peoples' Rights wrestled in its Study on Transitional Justice that was the basis for the African Union Transitional Justice Policy. The insights it offers on why, how and when Commissions of Inquiry in Africa facilitate accountability are profoundly informative not only for scholars but also for policy makers and practitioners.”
Solomon Ayele Dersso
Chairperson, African Commission on Human and Peoples’ Rights

“This book covers new ground, with six rich case studies drawing from on-the ground research across the African continent. It demonstrates that while independent mechanisms can all face significant challenges in the aftermath of grave violations of human rights, properly-mandated, adequately-empowered and well-supported commissions of inquiry can in some cases play a valuable role within broader processes of accountability. The authors rightly focus on the complementarity of the different elements that a transitional justice process must have in order to be compatible with human rights standards, making an extraordinary theoretical contribution to debates about how to guarantee human rights in the face of atrocious facts.”
Fabián Salvioli
UN Special Rapporteur on the promotion of truth, justice, reparation and guarantees of non-recurrence

Background and acknowledgments &
Members of the research team