Queer lawfare in Africa: Legal strategies in contexts of LGBTIQ+ criminalisation and politicisation 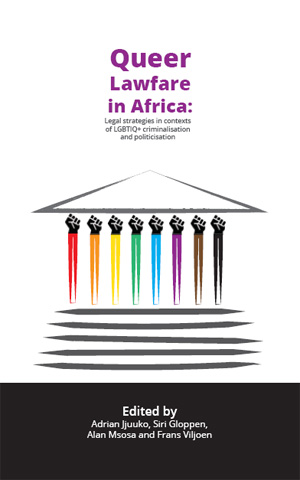 This book focuses on the strategies that activists for LGBTIQ+ equality in Africa deploy to challenge deep seated homophobia and transphobia, as well as the politicisation of LGBTIQ+ issues. It is a peer-reviewed, edited volume with scholarly contributions from lawyers, anthropologists, and LGBTIQ+ activists. It covers different country situations – those where equality is taking root, as the case is in South Africa, Botswana and Mozambique; those where homophobia reigns and LGBTIQ+ rights are politicised such as, Ghana, Kenya, Malawi, Nigeria, Senegal, Uganda, and Zambia; and those where traditional LGBTIQ+ activism is almost a nonstarter, such as in Ethiopia, Sudan and The Gambia.

PART I: LAWFARE IN THE CONTEXT OF LIBERALISATION AND PROTECTION OF THE SEXUAL RIGHTS OF LGBT PEOPLE IN AFRICA

PART II: LAWFARE IN THE CONTEXT OF ACTIVE POLITICISATION

Chapter 7
Against ‘the order of nature’: Towards the growth of queer lawfare in Nigeria
Ayodele Sogunro

PART III: LAWFARE IN THE CONTEXT OF RELIGIOUS AND CULTURAL NATIONALISM

Chapter 10
Senegal: Mobilising for gay rights in the shadow of HIV/AIDS
Vegard Vibe

Chapter 11
From a ‘crusade to root out homosexuality like malaria’ to a ‘non-issue’: The absence of sexual minority lawfare in The Gambia
Satang Nabaneh