The Gambia in transition: Towards a new constitutional order 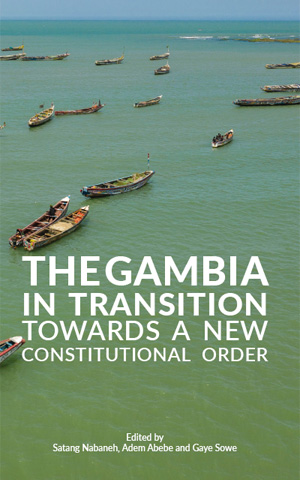 The Gambia in transition: Towards a new constitutional order
Edited by Satang Nabaneh, Adem Abebe and Gaye Sowe
2022

The Gambia opened a new chapter in her history after 22 years of authoritarian rule under former dictator Yahya Jammeh, heralding the promise of a ‘New Gambia.’ The country is at a critical juncture in its transition from Jammeh’s autocratic rule to a fully-fledged democracy. The ambitious transitional processes include the Truth Reparations and Reconciliation Commission to create an official record of past abuses and crimes, the Constitutional Review Commission to draft a new Constitution, and the permanent National Human Rights Commission to build a human rights culture. The Gambia in transition: Towards a new constitutional order is a diverse collection of timely, rigorous, and insightful essays on human rights, constitutional reform, rule of law and democratic governance. It serves as an important reference for academics, policymakers, researchers, civil society organisations, human rights defenders, learners, and the public at large.

“As The Gambia sets the agenda on how to move forward effectively and comprehensively with the implementation of the recommendations of the Truth, Reconciliation and Reparations Commission (TRRC), this book couldn’t have come at such an opportune time, when the country faces up to its inglorious past while committing to Never Again. This book is part of collective efforts to not only create a vast historical record of the impunity, lack of accountability and human rights violations that took place between 1994 and 2016 but also how we can create a better and more tolerant society, including establishing accessible and effective remedial systems and reforming political institutions to mitigate structural violence and social inequality. Further, this book will stimulate national debate and conversations on lessons learnt from the past and contribute to the emergence of a better, brighter, more peaceful Gambia, which is well poised to make reality the Never Again mantra and erect bulwarks against impunity and dictatorship.”

“A timely and pathbreaking volume that points to pathways for a more inclusive and democratic Gambia. Built around a people-centered, human rights approach, contributors proffer salient guidelines, which if ignored, risk deepening primordial faultlines.  The chapters cohere well and are united in their call for strengthening already existing legal instruments and provisions in the Constitution, and international treaties- to bolster representation, improve economic and cultural well-being for women, and marginalized linguistic groupings, and differently-abled persons. This well-crafted volume should be read widely in the transitional justice community and is particularly relevant for personnel in all branches of government, future framers of a new, or a modified 1997 Constitution, to position The Gambia on a sustainable democratic path.”

“This fine edited book is both a credible and timely addition to the discussion on constitutionalism, constitution-making, good governance, democratic consolidation and respect for human rights in Africa. The volume brings together practitioners and scholars of political science, law, human rights, and media studies to discuss issues of governance and democracy, constitution-making and human rights protection in the Gambia, in response to the social, economic, political and governance challenges the country faces. This admirable study breaks new ground, and its uniqueness is that it is, arguably, the first major analysis of the Gambian experience in advancing constitutional reform, good governance and human rights protection since The Gambia’s political transition began in 2016. Using a wide range of perspectives, this edited volume contributes important theoretical, conceptual, and empirical insights to existing knowledge. This important publication is bound to make a lasting contribution to Gambian Studies in particular, and African Studies, more generally. The text will surely stand the test of time and I strongly recommend it as an essential resource for students, researchers, policy-makers and anyone wanting to know more about The Gambia’s recent transition from autocratic rule to democratic government.”

Chapter 4: A case for constitutional guarantees for freedom of the media in The Gambia
Saikou Jammeh & Satang Nabaneh

Chapter 6: Women’s political participation in The Gambia – One step forward or two back?
Satang Nabaneh