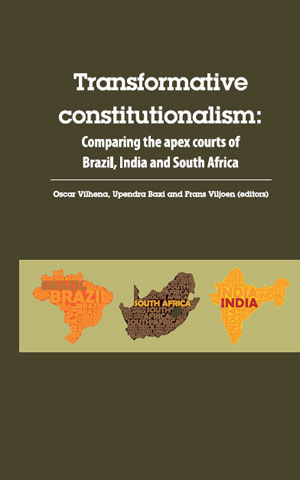 This peer-reviewed book contains a number of contributions about the role of the highest ('apex') courts in Brazil, India and South Africa, in giving effect to the generous group of rights recognised by the aspirational constitutions of these three countries. It is the result of a collaborative research project between researchers in the three countries, involving academics, human rights activists and a judge.

The aim of the book is to provide starting points for a horizontal South-South-South 'trialogue' about transformative constitutionalism. While not laying claim to provide a comprehensive comparison of every important aspect covered in each of the three Constitutions, the book focuses on selected thematic areas, including gender, socio-economic rights, land rights and the role of civil society.

CONTRIBUTORS
PART A: INTRODUCTION AND CONCEPTUALISATION

PART B: OVERVIEW OF THE THREE CONSTITUTIONS AND APEX COURTS

PART D: RIGHTS BEYOND THE STATE