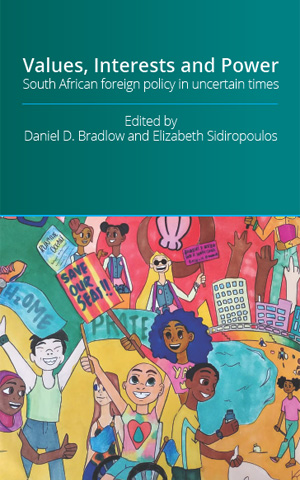 This book explores how South Africa can develop a foreign policy strategy that is appropriate to the uncertain times in which we live and that both helps the country address its overwhelming domestic challenges of poverty, inequality and unemployment and regain its former high international reputation. The contributors to this book offer analyses and proposals for developing such a strategy within the context of the country’s constitutional order and institutional constraints and that addresses the diverse and complex global and regional aspects of the country’s international relations.

“In this valuable book – which should be on every diplomat’s bookshelf - some of SA’s foremost experts offer the government frank and compelling advice on how to conduct a much better foreign policy over the next decade. … The authors challenge Pretoria to muster all the country’s assets and skills – and not just those of the ruling party – to pursue only the most important foreign policy goals. And to be guided always by the lodestar of the Constitution.”
Peter Fabricius, Foreign Policy Analyst, former Foreign Affairs Editor at Independent Newspapers.

“In this one-of-a-kind book of twelve chapters by emerging and experienced scholars, the authors probe into factors shaping South African foreign policy, lessons learned and the future strategy of the country’s foreign policy in an ever-changing world. A compelling read for policy makers and scholars.”
Ambassador Prof Iqbal Jhazbhay, University of South Africa, Member of the ANC’s N.E.C. International Relations Sub-Committee & former SA Ambassador to Eritrea

“This volume deserves to become a go-to classic on South African foreign policy. Its in-depth analysis will appeal to established experts in this area; its breadth will engage newcomers; its insights will be useful to scholars and practitioners alike.”
Professor Amrita Narlikar, President, German Institute for Global and Area Studies (GIGA)

“This book offers compelling insights on South Africa’s foreign policy ... These varied pieces provide textured and critical perspectives that may help open up an avenue to re-imagine South Africa’s foreign policy afresh in the post-Zuma years. It is a compendium that should appeal to scholars of international relations, practitioners of foreign policy, and the broader policy community.”
Professor Mzukiso Qobo, Head, School of Governance, University of the Witwatersrand

“This nuanced and richly detailed volume offers the reader superb analyses of South Africa’s foreign policy ... The authors’ contributions ... present both theoretical considerations and specific policy recommendations, which make the book highly useful for both scholars and policy makers ... Each chapter is thus certain to significantly contribute to promoting the public debate about South Africa’s place in the world.”
Professor Oliver Stuenkel, Fundação Getulio Vargas (FGV)