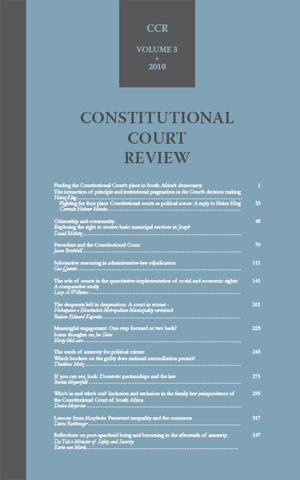 Its purpose is to provide a platform for high-level academic engagement with the jurisprudence of the South African Constitutional Court.

To this end, each issue of the Review contains two lead essays exploring broad themes arising from a given year’s jurisprudence (each ± 20 000 words), each with its own response (± 5 000 words); a number of shorter subject-specific articles (each ± 10 000 words); and several case comments that engage more narrowly with a given decision of the Constitutional Court (each ± 5 000 words).

Lead essays are solicited by the editors, as are some of the subjectspecific articles and case notes, but for the remainder unsolicited contributions are invited. Such contributions must be sent to the editors at This email address is being protected from spambots. You need JavaScript enabled to view it. in MS Word format on or before 31 May of the year following that on which a contribution focuses.