Alston and Heyns on Unlawful Killings: A Compendium of the Jurisprudence of the United Nations Special Rapporteurs on extrajudicial, summary or arbitrary executions from 2004-2016 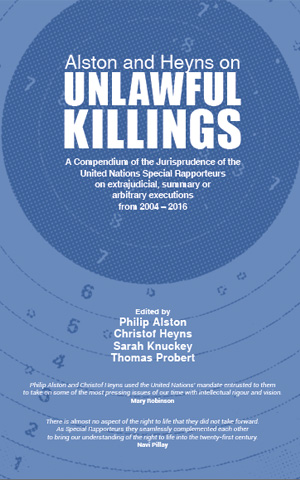 Alston and Heyns on Unlawful Killings: A Compendium of the Jurisprudence of the United Nations Special Rapporteurs on extrajudicial, summary or arbitrary executions from 2004-2016
Edited by Philip Alston, Christof Heyns, Sarah Knuckey, and Thomas Probert
2020

This book provides a detailed overview of the law and policy related to unlawful killings and the right to life. It is organized into the key thematic issues and types of killings that arose during the mandate of the UN Special Rapporteur on extrajudicial, summary or arbitrary executions between 2004-2016. Each chapter contains an introductory overview and selected extracts from UN Special Rapporteur reports to the United Nations General Assembly and the Human Rights Council and other normative work, and covers the applicable international law, policy considerations, and common fact scenarios.

Philip Alston held the mandate of United Nations Special Rapporteur on extrajudicial, summary or arbitrary executions between 2004 and 2010; Christof Heyns did so from 2010 to 2016. This book was created to provide easy access to the work of the Special Rapporteurs, and to be a useful guide for those studying and working to promote respect for human rights. The book was edited by the two rapporteurs, together with their main advisors during their tenure as mandate holders, Sarah Knuckey and Thomas Probert.

‘Philip Alston and Christof Heyns used the United Nations’ mandate entrusted to them to take on some of the most pressing issues of our time with intellectual rigour and vision. This book demonstrates the extent to which they helped shape key elements of the international law response to questions such as the use of lethal force, limitations on the death penalty, and the rules relating to the use of autonomous and other new technologies in warfare.’
– Mary Robinson, UN High Commissioner for Human Rights (1997 – 2002)

‘As UN High Commissioner for Human Rights during part of the time when Alston and Heyns were successively the Special Rapporteur on extrajudicial executions, I saw first-hand the contributions they both made. In addition to being first-rate lawyers, they were both innovative and willing to engage with some of the most intractable problems of our time. There is almost no aspect of the right to life that they did not take forward. As Special Rapporteurs they seamlessly complemented each other to bring our understanding of the right to life into the twenty-first century. This book chronicles that contribution.’
– Navi Pillay, UN High Commissioner for Human Rights (2008 – 2014)

‘This book, by two leading international experts, is essential reading on a topic that is regrettably of current concern. The very concept of extrajudicial killing is anathema to anyone who respects human dignity, the right to life and the rule of law.’
– Richard Goldstone, first Chief Prosecutor of the UN International Criminal Tribunals for the former Yugoslavia and for Rwanda

‘A vital part of efforts to prevent and to punish extrajudicial executions around the world is the development of a detailed set of standards. The work done by Christof Heyns and Philip Alston contributed greatly to our understanding of the law in this vitally important area. This compendium of the jurisprudence on topics as diverse as police killings, the death penalty, and killings by non-state actors will be immensely helpful to anyone working on these issues.’
– Agnès Callamard, Special Rapporteur on extrajudicial, summary or arbitrary executions

Chapter III: Use of Force by Law Enforcement Officials

Chapter X: Using Information and CommunicationTechnologies to Protect the Right to Life