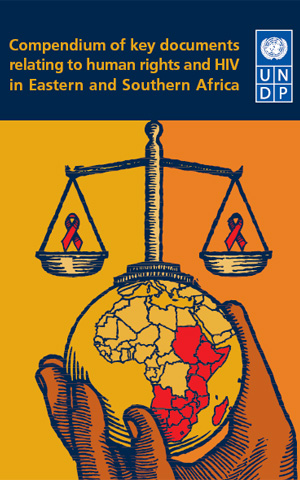 Compendium of key documents relating to human rights and HIV in Eastern and Southern Africa
Edited by AIDS and Human Rights Research Unit, a collaboration between the Centre for the Study of AIDS and the Centre for Human Rights, University of Pretoria
2008

The Compendium of key documents relating to human rights and HIV in Eastern and Southern Africa is a collection, in five parts, of global, regional, sub-regional and national human rights instruments, policies, legislation and case law that are relevant to HIV and AIDS. In most instances, only excerpts pertinent to HIV and AIDS are provided. When applicable, reference is made to a source where the full text may be accessed.

Part A: The global documents include UN conventions, declarations, concluding observations and other relevant documents as well as instruments adopted by the World Trade Organisation.

Part B: The regional documents include those adopted within various organs and institutions of the African Union including concluding observations and resolutions from the African Commission on Human and Peoples’ Rights, and relevant documents form the New Partnership for Africa’s Development (NEPAD) and the African Peer Review Mechanism (APRM). Abstracts of country review reports of the APRM are also provided.

Part E: For purposes of comparison and experience sharing, the Compendium also contains relevant documents (legislation, case law and policies) from other regions. These regions include other parts of Africa. In spite of their efforts to provide a comprehensive overview of HIV-related legislation, policies and case law from Eastern and Southern African countries, the compilers and editors of the Compendium acknowledge the difficulties inherent in such an endeavour. Paramount among these difficulties is the lack of accessibility of some relevant documents. This Compendium therefore does not cover all documents related to HIV in Eastern and Southern Africa. It should still be useful to parliamentarians, members of the judiciary, lawyers, civil society organisations, people living with HIV and all interested institutions and individuals as a reference book that provides a comparative overview of the legal and policy frameworks on HIV in Eastern and Southern African countries. Efforts have been made to ensure accuracy in the translation of legislation and policies of francophone and lusophone countries. It should be noted that these translations remain unofficial. In addition, some of the original texts and case law in this Compendium have been edited for consistency. Footnotes have also been omitted from excerpted case law. However, the editing and omissions do not alter the substance of the reprinted documents. Dates provided after treaties (such as ‘1958/1960’) indicate the date of the treaty’s adoption (first date ‘1958’) and subsequent entry into force (second date ‘1960’). The Compendium is one of a series of tools developed by the AIDS and Human Rights Research Unit for the UNDP’s HIV and AIDS Team at the Regional Service Centre in Johannesburg. These tools are aimed to reinforce the response to HIV of countries in Eastern and Southern Africa. The other tools are: Guide to an effective human rights response to the HIV epidemic, Checklist of human rights obligations to effectively address HIV and AIDS in Eastern and Southern Africa, powerpoint cum Flip Chart presentation, and CD Rom of key documents relating to human rights and HIV in Eastern and Southern Africa. The complete version of the tools may be accessed on the following websites: http://www.chr.up.ac.za/undp and http://www/undp.org/hiv/pa_africa.htm

As far as possible, the documents and information in this Compendium reflect the position as at 31 December 2007.

B REGIONAL DOCUMENTS
B1 AU treaties
B1.1 Constitutive Act of the African Union (2000/2001)
B1.2 African Charter on Human and Peoples’ Rights (1981/1986)
B1.3 Protocol on the Rights of Women (2003/2005)
B1.4 African Charter on the Rights and Welfare of the Child (1990/1999)
B2 AU declarations and similar documents
B2.1 Tunis Declaration on AIDS and the Child in Africa (1994)
B2.2 Grand Bay (Mauritius) Declaration and Plan of Action (1999)
B2.3 Abuja Declaration and Plan of Action on HIV/AIDS, Tuberculosis and Other Related Infectious Diseases (2001)
B2.4 Maputo Declaration on HIV/AIDS, Tuberculosis, Malaria and Other Related Infectious Disease (2003)
B2.5 Solemn Declaration on Gender Equality in Africa (2004)
B2.6 AU Commission Chairperson’s 2nd Progress Report on the Implementation of the Solemn Declaration on Gender Equality in Africa
B2.7 Gaborone Declaration on a Roadmap Towards Universal Access to Prevention, Treatment and Care (2005)
B2.8 Continental Framework for Harmonisation of Approaches among Member States and Integration of Policies on Human Rights and People Infected and Affected by HIV/AIDS in Africa (2005)
B2.9 Brazzaville Commitment on Scaling Up Towards Universal Access to HIV and AIDS Prevention, Treatment, Care and Support in Africa by 2010 (2006)
B2.10Abuja Call for Accelerated Action Towards Universal Access to HIV and AIDS, Tuberculosis and Malaria Services in Africa (2006)
B2.11 Africa’s Common Position to the UN General Assembly Special Session on AIDS (2006)
B2.12 Progress Report on the Implementation of the Plans of Action of the Abuja Declarations on Malaria (2000), HIV/AIDS and Tuberculosis (2000/1 to 2005) (2006)
B3 ACHPR concluding observations and resolutions
B3.1 Concluding Observations and Recommendations on South Africa’s Initial Report to the African Commission (1999)
B3.2 Resolution on the HIV/AIDS Pandemic – Threat Against Human Rights and Humanity (2001)
B3.3 Resolution on the Situation of Women and Children in Africa (2004)
B4 New Partnership for Africa’s Development (NEPAD)
B4.1 NEPAD Framework Document (2001)
B4.2 NEPAD Health Strategy (2003)
B4.3 African Peer Review Mechanism (APRM) Declaration on Democracy, Political, Economic and Corporate Governance (Governance Declaration) (2001)
B 4.4 Country Review Reports to the APRM
Country Review Report – Rwanda (2005)
Country Review Report – Kenya (2006)