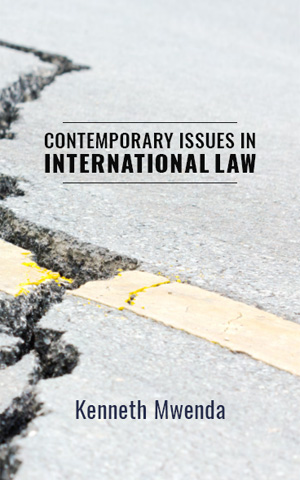 “Whether International Law is really law is one of those vexed questions that still linger. Prof. Mwenda’s three-pillar approach to looking at International Law is an exceedingly useful conceptual framework which is, at the same time, emblematic of the malleable nature of the discipline. The analysis demonstrates when States pay attention to international law, why they feel compelled to do so, when they choose not to, and why all that matters. This is an extremely timely and accessible book which should be useful to the legal academy and to practitioners.”

“Prof. Mwenda’s book, ‘Contemporary Issues in International Law’, is a must-read masterpiece on international law for practitioners, academics and students of public international law. It is a thought-provoking book that touches on contemporary issues confronting international law at a time when multilateralism…is under serious threat. It touches on issues that need to be discussed and addressed in order to be able to deal with the emerging challenges of rising nationalism among leading nations of the world.”

A recipient of the Presidential Insignia of Meritorious Achievement (PIMA), awarded for his outstanding scholaly works, Prof. Kenneth K. Mwenda is a Rhodes Scholar and alumnus of the University of Oxford and Harvard University John F Kennedy School of Government. He also studied at Harvard University Business School, Wharton Business School at the University of Pennsylvania, INSEAD (Institut Européen d’Administration des Affaires), MIT (Massachusetts Institute of Technology), Stanford University, London Business School, Yale University, Cornell University, Georgetown University, the University of Warwick, the University of Hull and Kellogg School of Management at Northwestern University. A widely recognised thought-leader and author of more than twenty-five (25) scholarly books and over one hundred (100) articles in leading academic journals, Prof Mwenda has taught at leading universities in Europe, North America and Africa, maintaining a parallel life in academia and at the World Bank. His scholarly work has been cited as authority not only in academia, but also by courts of law and various international organisations and international financial institutions.