Politocracy: An assessment of the coercive logic of the territorial state and ideas around a response to it 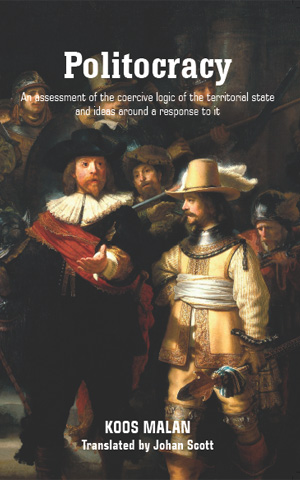 Politocracy: An assessment of the coercive logic of the territorial state and ideas around a response to it
by Koos Malan
Translated by Johan Scott
2012

A masterly summary of the history of Western political philosophy, political science and constitutional law introduces a profound and disquieting analysis of the modern territorial state. Isn’t ‘democracy’ in a heterogeneous society with a numerically dominant group necessarily synonymous with the oppression of minorities? Can human rights and the courts sufficiently protect the uniquely distinctive character of minorities? Prof Malan presents his partial solution of ‘habitative communities’ – voluntary groupings of like-minded persons that can be formed on various bases – by no means in a prescriptive manner, but as a thought-provoking contribution that will give rise to serious reflection and debate in both academia and political practice.
– Eberhard Bertelsmann, High Court, Pretoria

Is the classical triad of “monarchy, aristocracy, democracy” soon to be supplemented with a fourth type, namely “politocracy”? Or should we rather replace the triad with its further evolved form, which affords a more plausible representation of the diversity of our society? Koos Malan has succeeded in arousing our thoughts on the path followed by the modern state, by referring to the most authoritative authors – past and present. But above all, it is his own analysis that urges the reader on, not only towards new designations, but especially towards improved realities.
– Frank Judo, Advocate, Brussels

The author demonstrates that the modern territorial state in fact fails to provide due protection to various linguistic, cultural and religious entities within the state. He proposes well-considered, practical and stimulating suggestions for the possible solution of problems that are especially experienced in states that contain strong minority cultural groups. His description of politocracy, which amounts to actual democracy, deserves real and thorough consideration.
– George Barrie, University of Johannesburg

Koos Malan Professor of Public Law, University of Pretoria and Advocate of the High Court of South Africa