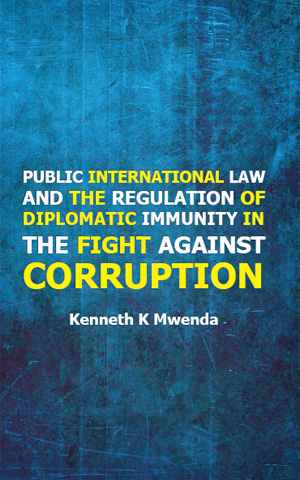 Juxtaposed between anti-corruption initiatives and the principles of public international law pertaining to diplomatic immunity, this book critically examines the scope and limitations of diplomatic immunity in the fight against corruption. In a world where a very large number of States depend on richer nations for economic aid, it is inevitable that the old rule of non-interference in internal matters will be challenged. The traditional view is that Article 41(1) of the Vienna Convention on Diplomatic Relations 1961 prohibits diplomats from interfering in the internal affairs of the State to which they are accredited. Against this background, should diplomats from donor States be expected to keep quiet where the funds provided by the donor States to the recipient States are misused or otherwise corruptly spent?

“Professor Mwenda has presented in this book some very interesting legal avenues to diminish corruption... It has strong implications for policy makers and it is well suited for legislators, university students and the general public.”

“Prof. Mwenda has once again put his intellectual mettle on display... His work is an honest attempt to provide legal answers to complex problems brought on by diplomatic immunity in today’s world. While the solutions offered are essentially legal in nature, Prof. Mwenda’s extensive analysis and his ability to draw parallels between domestic and international law, as well as his skilful use of contemporary examples, makes this book not only accessible but actually useful to businesspeople, politicians, and other non-lawyers.”
– Hon. Mr. Chisanga Puta-Chekwe, Deputy Minister of the Canadian Ministry of Citizenship and Immigration, and Canada’s Deputy Minister Responsible for Women’s Issues.

Professor Kenneth K Mwenda is Senior Counsel in the Legal Vice-Presidency of the World Bank, Washington DC and Extraordinary Professor in the Faculty of Law at the University of Pretoria, South Africa.