The Three Books on interes-bearing loans and interest (Foenus et Usurae) by Gerard Noodt, Jurist and Professor of Law 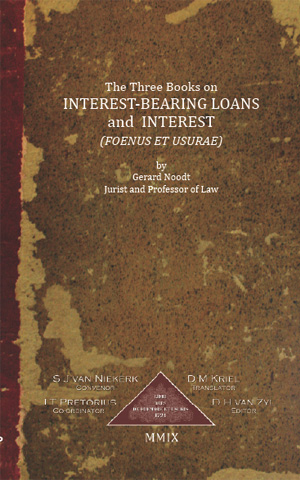 I. INTRODUCTION
[1.1] This publication is the proud result of the team effort of the project participants named below. The project was initially inspired by the unavailability of a translation from Latin of the excellent writings of one of the great Roman-Dutch jurists, Gerard Noodt. A biography of Noodt published in 1988 fostered that initial inspiration.

[1.2] The remarkable modern biography of Noodt was published in 1988 by Clarendon Press (Oxford University Press). The publication is titled The Life and Work of Gerard Noodt (1647 1725) Dutch Legal Scholarship Between Humanism and Enlightenment, authored by the late Prof GCJJ van den Bergh, then professor of the history of law at the University of Utrecht, Netherlands. Prof van den Bergh undertook a comprehensive study into the life and work of Gerard Noodt and his subsequent publication favoured the entire legal fraternity with an excellent addition to existing literature. His work ultimately inspired the undernamed project participants to produce a modern translation into English, as true to the original Latin text as reasonably possible, of an important but largely inaccessible part of Noodt's work, being his treatise The Three Books on Interest-Bearing Loans and Interest named De Foenore et Usuris Libri Tres forming part of his composite work named Opera Omnia.

[1.3] More about that part of Noodt's treatise, his prominence as one of the greatest of Roman Dutch jurists, the team effort in achieving this publication, and the financial assistance towards the accomplishment of this publication, will concisely be addressed below.

[1.4] Prof van den Bergh's extensive biography facilitates a brief capturing of the most important moments of Noodt's life and legal works without recourse to other sources. The following concise summary, extracted from and premised on that biography, is intended to introduce the reader to this remarkable jurist.

[1.5] Thereafter a table of contents will be given facilitating easy access to the topics covered by Noodt in his treatise on interestbearing loans and interest.

II. GERARD NOODT (1647-1725): THE JURIST
[2.1] Gerard Noodt was born in Nijmegen in September 1647. He studied at that university and thereafter at the universities of Franeker, Leiden and Utrecht. After having been an attorney and advocate for a brief period of time, he was appointed professor of law at the University of Nijmegen at the age of 24. This was a short-lived appointment due to the French invasion and occupation of that area, shortly thereafter resulting in the unfortunate demise of the university.

[2.2] In September 1679 at the age of 32, Noodt left Nijmegen, took up a professorship at Franeker University, and occupied the chair until then held by Ulrik Huber, who was appointed to the bench of the court of Friesland. Thereafter and at the age of 36, Noodt became professor at the University of Utrecht from 1683 (where he filled the vacancy left by Johannes Voet) until 1686, after which he finally settled (after having spent his life up to that point in time in the provinces of Friesland and Utrecht), at the University of Leiden in Holland.

[2.3] There he served, for the remainder of his life, (almost four decades), the University of Leiden. He held the position of Professor of Law and served two terms as rector of that famous institution.

[2.5] The final edition of his Opera Omnia was prepared approximately one year before his death.

III. NOODT’S MAJOR WORKS
[3.1] Noodt’s major works include the Probabilia Juris Civilis, first published in 1674, consisting of essays on a variety of civil law topics. De Civili Prudentia, his inaugural address at Franeker in October 1679, followed approximately five years later, and thereafter his inaugural address at Utrecht in February 1684, titled De Causis Corruptae Jurisprudentiae. Those addresses emphasised the gradual historical development of legal science, the interrelation between law and freedom and the importance of understanding the true meaning of concepts of classical Roman law. In 1690 his two monographs, titled De jurisdictione et Imperio Libri Duo and Ad Legem Aquiliam Liber Singularis appeared, which addressed aspects of both private and public law. Once again his interpretations and emendations of Roman law texts characterised his work. In 1698 his monograph De Foenore et Usuris appeared and from that year until 1710 virtually one new publication followed each year.

[3.2] Noodt’s approach to the subject of interest-bearing loans and interest included an analysis of Latin terminology employed in Roman law, an exhaustive treatment of the moral and legal justification for the charging of interest, an analysis of existing and maximum interest rates and the origin and termination of the obligation to pay interest. That publication conclusively established his standing as an excellent scholar and his command of the roots of Roman civil law.

[3.5] Noodt is considered to be one of the greatest Roman Dutch jurists (van Zyl: Geskiedenis van die Romeins-Hollandse Reg, Butterworths, Durban, 1979 p.492). He established himself as one of the enlightened scholars of his time, and as an exponent of the ‘elegant’ school of thought following the Methodus Noodti, an approach to jurisprudence which emphasised the need for true historical interpretation of the Roman civil law texts and their explanation in the light of humanistic considerations of justice and equity and the law of nature. Prof van den Bergh (op.cit. p.181. et seq.) considers the treatise on interest-bearing loans and interest to be one of Noodt's greatest achievements. Yet Noodt's works have not been favoured with translation of his original Latin texts into English to the extent which befell other greats of Roman-Dutch jurisprudence such as De Groot (Grotius) and Voet.

[3.6] Noodt's sometimes abstruse Latin style may very well have discouraged potential translators. We accordingly hope that this publication will contribute towards the unravelling of one of the proverbial jewels of an expert historical jurist, who devoted much of his productive time and energy towards the study of interest as the ‘Iife blood of finance’.

[3.7] For purposes of convenience the Latin foenus will be rendered, in the English translation, as ‘interest bearing loan’, ‘loan at interest’, ‘interest’ or simply, ‘Ioan’. The Latin usura (plural: usurae) will be rendered throughout as ‘interest’, while the concept of sors will be rendered as ‘capital’ or ‘principal’ in the sense of the amount on which interest is paid. The terms ius civile (Roman ‘civil law’) and ius gentium (the ‘law of nations’) will retain their Latin form. The names of classical authors, legal or otherwise, will be rendered in their established English form, eg ‘Justinian’ (Justinianus), ‘Constantine’ (Constantinus), ‘Ambrose’ (Ambrosius), ‘Basil’ (Basilius), ‘Isidore’ (Isidorus), ‘Jerome’ (Hieronymus), ‘Augustine’ (Augustinus), ‘Diocletian’ (Diocletianus), ‘Paul’ (Paulus), ‘Ulpian’ (Ulpianus), ‘Papinian’ (Papinianus), ‘Pomponian’ (Pomponius), ‘Aristotle’ (Aristoteles), ‘Horace’ (Horatius), ‘Livy’ (Livius), ‘Quintilian’ (Quintilianus), ‘Pliny’ (Plinius) and ‘Terence’ (Terentius).

IV. PROJECT PARTICIPANTS AND ACKNOWLEDGEMENTS
[4.1] Each of the following four project participants contributed to this publication: S J van Niekerk originated the idea of producing a publication of this magnitude in order to add to existing historical legal literature on banking law in general as well as the law of interest in particular; JT Pretorius co-ordinated various efforts towards its accomplishment; DM Kriel attended to the actual translation of Noodt's Latin text. Ph J Thomas assisted towards the revision of Book I and DH van Zyl revised the entire translation.

[4.2] Our sincere gratitude is extended to Pretoria University Law Press, which undertook the publication of this work, as well as to Nedbank for its financial contribution towards the costs incurred in the preparation of the final manuscript, and also publishing costs. In particular the keen interest in the work taken by Nedbank's Professor Willem Kruger is highly appreciated.