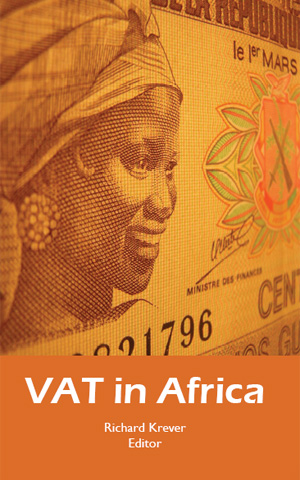 VAT in Africa
by Richard Krever
2008

From an inauspicious start in the second half of the 20th century, the value added tax is now, just over five decades later, a key component of the revenue base in jurisdictions around the globe. A tax on final consumption is seen to be an important element of sound public finance policy and the VAT has clearly emerged as the preferred model for consumption taxation.

Its rate of take up in Africa is not dissimilar from that in other jurisdictions, but African experience is proving unique in some respects. One of these is the signifi cant variation of VAT legislation in Africa, refl ecting the extent to which jurisdictions, sometimes neighbouring countries, have turned to fundamentally diff erent models as the basis for their own VAT laws.

Another special characteristic of African VAT is the extent to which implementation of the VAT has exposed the need for broader institutional reform and modernisation of revenue administrations. And finally, authorities have found that VAT poses unique challenges in African economies in which commercial arrangements range from traditional economies through to globalised and electronic transactions in the same marketplace.

Much younger than the VAT, the African Tax Institute also enjoyed a modest start, commencing its program of providing training to African tax administrators in 2002 as the Southern African Tax Institute, as it was then known. It has accomplished much in a short time. To date more than 600 government tax offi cials from 21 African countries have benefi ted from one or more training modules or workshops off ered by ATI and its predecessor body.

In addition to its formal training program, ATI is committed to developing opportunities for African administrators to access African and international expertise through specialised conferences and seminars and to make the proceedings of these forums available to wider audiences. A number of the papers in this volume, the inaugural book sponsored by the institute, derive from a VAT in Africa conference sponsored and hosted by the ATI, with support from the Taxation Law and Policy Research.

Richard Krever is a professor in the Department of Business Law and Taxation, Monash University, Caulfield.

Part I: Design and Structure of the VAT