Disasters of Peace Part 2: A student perspective - PULP FICTIONS No.7 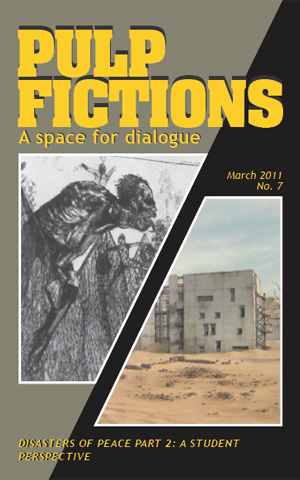 In this edition of Pulp fictions two law students reflect on the issues taken up in the first edition of Pulp fictions in 2005. Joel Modiri and Emile Zitzke (both second years in 2011), after reading the dialogue between Heyns and Van Marle last year as first year students coming into the faculty of law were prompted to revisit some of the issues raised. Heyns and Van Marle’s dialogue was in response to a decision of the Centre for Human Rights not to display a group of etchings by Diane Victor from her Disasters of Peace series in their offices and a subsequent decision of the University’s management, taken after the group of etchings had been moved to the Department of Public Law, to remove two of the etchings that were found to be most offensive by a group of complainants including the then principal of the University, Prof Calie Pistorius.

Six years after the removal of these art works Modiri and Zitzke bring fresh perspectives to the debate. Added to this edition also is a musing by Prof Christof Heyns.

The original idea with Pulp fictions was to open spaces for discussion, dialogue and dissent and opportunity for creativity, experimentation and reimaginings.

Over the past 6 years, colleagues from the UP Faculty of Law; from other faculties in UP; and from other universities have participated, as have a judge of the Constitutional Court and an attorney. This is the first edition in which students have entered these spaces. We welcome this expansion and reiterate previous calls for more participation from the UP academic community and beyond.