On ‘Shoot the Boer’, hate speech and the banning of struggle songs - PULP FICTIONS No.6 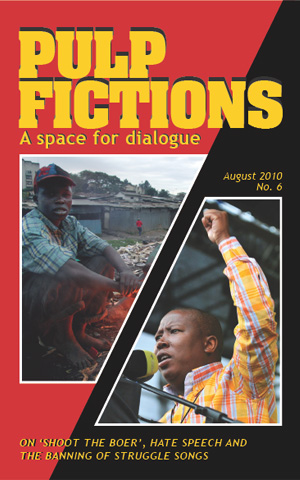 On ‘Shoot the Boer’, hate speech and the banning of struggle songs - PULP FICTIONS No.6
Edited by Karin van Marle
2010

In the two contributions to this volume we find the following passages:

‘Whether one is an upper-middle class Afrikaner or a poor black rural woman whether one is a black small business entrepreneur or a poor white car guard, an obsession with hate speech will not do us any good.’ (De Vos)

‘The protection of these values is not sub-ordinate to the problems of unemployment corruption, poverty and discrimination. On the contrary, those problems can only be tackled if these values are upheld and developed.’ (Spies)

David Scott in Conscripts of modernity: The tragedy of colonial enlightenment (2004) investigates how colonial struggles are told in history. He observes how often what happened in the past is told to serve present day priorities. CLR James’s account of the Haitian Revolution of 1791-1804 in his work, The Black Jacobins, is one example of a text written in a time when decolonization was a future possibility. This work is described by Scott as a work of anti-colonial longing. Scott’s argument is that we should move away from anti-colonial longing in order to start thinking of other kinds of problems and other kinds of questions. James, in a revised edition of The Black Jacobins published in 1963, recast the initial narrative from one of romance to one of tragedy. In a post-apartheid South-Africa we are constantly being haunted by our apartheid and colonial past. How we respond to, but even before responding, how we understand the many challenges we face today — ongoing poverty, crime, corruption, equality, dignity, freedom of speech — may depend on how we relate to past, present and future, and specifically how we frame the stories of the struggle against colonialism and against apartheid. Becoming post-colonial (post-apartheid) requires new angles, new starting points. It might be fruitful to study the actions and speech of Julius Malema in light of Scott’s observations. In other words we could reflect on the extent to which Malema remains in an anti-colonial struggle engulfed by Romanticism and is therefore not engaged in a postcolonial struggle, and accordingly fails to engage in a ‘politics for a possible future’. (Scott (2004))

In this edition of Pulp fictions, Pierre De Vos takes another angle on the issue of Julius Malema’s singing of struggle songs and his statements concerning victims of rape. De Vos argues for us not to be blinded by debates on freedom of speech / hate speech, if the real issue is a political struggle for socio-economic transformation. For De Vos, ‘poverty, corruption, discrimination and a lack of service delivery are far more important issues that need to be faced head on.’ Willie Spies in response to De Vos argues for ‘a change of our mindset’ and that such a change is not contrary to socioeconomic reform but rather tightly connected to it.